Board Elections and You!

The Board Elections are nearly upon us! Some details are described below, but first: would you like be a candidate to join the Board? Please email president@friendsofburkinafaso.org to be part of an informational call about helping to lead FBF in to the future. Please also ensure your membership dues are current - email treasurer@friendsofburkinafaso.org if you're unsure.

Now then! As current FBF President, I wanted to let y'all know I'll be stepping down and leaving the Board. I first joined the FBF Board in 2012 (I think...), splitting the Communications role with another RPCV friend. Then I took on the Technology Officer role, and this last term as President. It's been a pleasure, it's been a learning experience, and now after 10 years it's time to go! I'm looking forward to a new volunteer gig local to where I live in Maryland, among other things.

A couple other Board members are also stepping down, while several will be running for another term.

So how does this all work?

According to the FBF by-laws, there are 9 "Officer" positions on the Board. So, there will be 9 individuals selected to make up the Board.

Also according to the FBF by-laws, the new Board will themselves decide who takes up which positions. This is not like voting among 3 candidates for Project Officer, 2 candidates for Technology Officer, etc. Rather, this is voting for the 9 individuals who will be on the Board, and then those elected individuals sort out which responsibilities each will carry out.

(We encourage candidates for the Board to express their preferences when elections are underway. This may help members decide what mix of folks makes the most sense for them.)

As for the elections themselves, the process is straightforward:

We have not yet determined the exact election dates, but plan to be underway by mid-September at the very latest.

Who is a "good" candidate?

While the answer is of course subjective, I'd like to suggest "good" candidates have some of the following characteristics: they have a strong tie to Burkina Faso; they are willing to spend at least a few hours each month on something FBF-related; they are willing to consider the differing opinions of other Board members; they are "in it" for the people of Burkina Faso.

Not exactly an exhaustive list, but to me these cut pretty much to the essence.

Please share this message with anyone who may be interested. Anyone can run as long as they are a dues-paying member (and ideally represent the aspects just above), and paying dues can be accomplished with the click of a button.

Please follow Anne Spear as she trains for the “Ironman 70.3 Eagleman” in support of Burkina Faso. Instagram: @dr.ironroots. Email: aspear@leaderself.net. Share her journey with your networks and help her raise funds for community-led projects via FBF.

It’s 4am on December 15th, 2019. I am in Daytona Beach, FL, putting on a borrowed wetsuit. As I start to warm-up for the Challenge Daytona triathlon, I am taken back to a time I was awakened at a similar early morning hour in August 2008.

I had just arrived in a medium-sized rural village of Tangaye, in Northern Burkina Faso. A family had agreed to host me for the two years of my U.S. Peace Corps Service. Even before the sun was up, I heard pots boiling and the shuffling of feet across a dusty courtyard. I barely knew how to ask for some water to take a “bucket bath”, whatever that was.

I had one thought: What have I done?

11 years later on that December race day, that same thought ran through my head. Only instead of being in the middle of the Sahel, I was in open water, in full panic attack, during the beginning of a half ironman distance (70.3 miles) triathlon.

What have I done?

While I had planned to go in to the Peace Corps, I hadn’t planned so much to do a half ironman. It all came to be through some shocking events. In September 2019, I was in my comfortable, dry bed when I received a What’s App message that Tangaye, my host village, had been attacked by terrorists. The two schools there were burnt down, along with the health clinic. 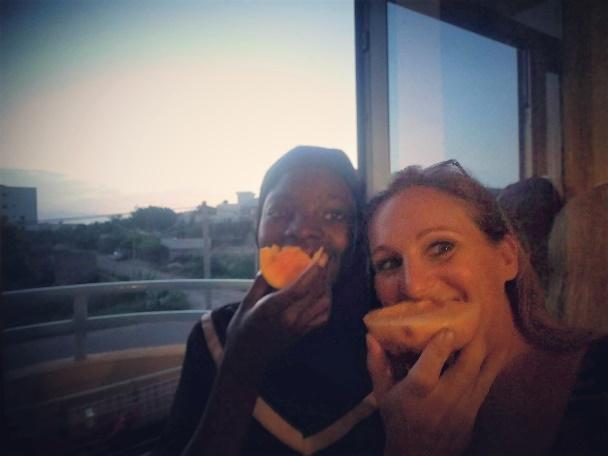 It had been unsafe for me to visit Tangaye for quite some time. Even when I was in Burkina Faso for two months during 2018 doing my dissertation, I was told not to return to the northern region for a visit. By 2019, I followed even more restrictive advice, to stay put in the capital, Ouagadougou.

This was especially hard, to stay away from people I cared about so deeply. During my two years in Tangaye, I had become “bien intégré”, a third mother to the four children in the family, eating and sleeping on the same mat with the women and children. I shared everything, and in return everything was shared with me.

Ramata and Abibou, the two wives of Saibou, knew me. We had gone through our share of misunderstandings, frustrations, and miscommunications. Yet we persevered through patience and, I dare say, love. Even after returning to the U.S., and despite the bad phone reception, I did not have to say much for them to understand how I felt and what was going on in my life.,

Aissata, the second child of Ramata, who was five years old when I came into her life, was my constant companion for those two years. I will never know what it was like for her when I left...

How to submit a Blog to Friends of Burkina Faso

Send to communications@friendsofburkinafaso.org
State your full name, years and place served if RPCV, or your connection to Burkina Faso if not a former Peace Corps volunteer

Blogs are typically 600-800 words in length, but can vary.
Include 1 or more pictures with your submissions.
Include 1 or more headings to help break up text on screen.
We can publish in English or French. Please note we cannot guarantee translation between the two.

Need some help getting started? You could write about...

What was it like digging wells in the late 1960's in "Upper Volta" -- what is now Burkina Faso? Read this first-hand account and instruction guide for future well diggers to find out.

The ostensible reason for going to Upper Volta in the first place was to be a puisatier, a digger of wells. More specifically , my job “was animating the local population to dig and cement large-diameter wells, and to educate the people on the health and agricultural benefits of a clean water supply”. And indeed, for two years I and my fellow well diggers organized our lives around the well digging season. My memories of the actual activity are sketchy, but somewhat refreshed by having lately gone through all of my letters home. In those letters, mostly covering the months January through June, the well digging season, I do make some effort to tell my mother about both the process and the challenges of carrying out my primary responsibility to the people of Upper Volta. Armed with that evidence I want to see if I can get to the reality of it.

First, it is important to note that in my COS documents provided by Peace Corps I am credited with "digging" 11 wells. As mentioned, my late middle aged brain has recollection of only a couple of specific wells, and those may in fact be composites of various wells, and the reality is that I dug none of them.  Nevertheless, I attempt here to provide instructions, 50 years later, for future well diggers in the Sahel

How to build a well

Have the village locate a site. They may know from experience where there is likely to be water, and there will probably be village politics involved (near the chief’s compound is a likely location) and you definitely don’t want to get tangled up in them. If they want to use a dowser go ahead and pay for it, so if the well fails you cannot be blamed. Recognize that the chances of choosing a site that will hit granite at 15 feet are 50/50 and that nothing is more discouraging to the villagers than creating dry holes in the sahel- “ya wenam bala” (God’s will) only goes so far in keeping the village engaged in too many futile efforts.

Make sure that the village has identified where they will get sand and gravel for the concrete, and have them begin to amass a suitable pile of both before you begin digging. Promise the bigas candy and the women the used concrete sacks as incentives  but let the chief or whomever he designates as the local leader hand them out. Remember that the sand and gravel are being swept up by hand and brought to the site in baskets on the heads of the women, and plan accordingly. You will need enough  to build a mixing platform and set posts for a pulley system at the beginning of the project., and once you hit water...