Bilingual School for the Fulani

Article on this project from the Burkina Connection Newsletter, May 2021:

The life styles and cultural mores of pastoralists in Burkina Faso have undergone dramatic change within the last half century due to climate change, dramatic growth in the population, and increased
competition for land use. According to Madame Diaby, Director of the min-dairy in Bittou, Fulani herdsmen in Burkina Faso began moving their families to Nouhao, a pastoral zone in the southeast, established by the government in 1986. Over time, many of the migrating Fulani families adopted a quasi-sedentary way of life and settled in a commune within the Nouhao zone, known as Singoghin.

As was previously reported in the Burkina Connection (2018, No. 1), the women of Singoghin approached Father Maurice Oudet expressing a desire to have a primary school built for their children in the commune. Father Maurice and his organization SEDELAN developed a relationship with ABADAS, a philanthropic organization in France. Together they marshalled resources and joined hands with the Burkinabe government with the result being that not only has a primary school been built but education has become highly valued among the residents of Singoghin.

Extraordinary challenges confront Burkina Faso and its people these days. While the threats of jihadist-induced terrorism continue, the emergence of the Covid-19 pandemic has compounded the disruption. To stem the spread of the disease, the government closed schools throughout the country and imposed travel restrictions for many months. Given these troubled times, it is encouraging to know that there are determined efforts to improve the quality of life in Burkina while strengthening the overall well-being in society. Below is a noteworthy example of recent progress being achieved to promote education among the Fulani within the Singoghin commune.

In February 2021, Dr. Issa Diallo took a field trip to the Boulgou province to evaluate the status and monitor progress being achieved at the bilingual school in Singoghin. The first stop on his journey was to meet with regional officials in Bittou. Information was exchanged about continued government financial support for the school and its personnel--a topic of considerable importance given budgetary constraints due to unforeseen government costs protecting the local population against the dual threats of terrorism and the pandemic. Good news followed, shortly upon his return to Ouaga. The government granted authority enabling a third teacher to be assigned to the school. Subsequently, an instructor, fluent in Fulfulde and French, was tendered an offer to be hired and he accepted! Following Diallo’s visit to Bittou, he traveled to the adjacent Fulani commune in Singoghin to dialogue with students and teachers at the bilingual school. He found the students to be “very motivated to learn” as was demonstrated when the children assembled under trees and resumed their studies after returning to school following lunch. Their response enabled Diallo and the teachers to continue with their discussions. A particularly novel idea that emerged from this conversation was the possibility of augmenting the core student curriculum to incorporate practical lessons focused on farming and animal husbandry.

In March, the contractor completed construction of the second building that he had promised to complete. Having two buildings will enable the school to accommodate a stream of students with 5 classes in the years to come.

On April 7th, a working conference was held in Ouagadougou at which interested parties in the Singoghin school attended, including 13 in-person and 4 virtually. The conference opened with the announcement of the formation of the new association, called DELAN (Développement, Education, Lait, Langues Nationales). DELAN was created to replace SEDELAN, the NGO that has played a pivotal role leading the Singoghin/Bittou project, thanks to the leadership of Father Maurice Oudet who is retiring. ABADAS (SEDELAN’s partner organization) and DELAN will now assume joint leadership of the Singoghin/Bittou educational initiative. Dr. Issa Diallo, the President of DELAN, is in the throes of seeking NGO status for DELAN, a lengthy process that typically takes about a year to obtain.

The conference in Ouaga opened with presentations focused on educational modules developed by MENAPLN (Ministère de l’Education Nationale, de l’Alphabétisation et de la Promotion des Langues Nationales) that the ministry shall be sharing with the Singoghin/Bittou project. These modules, when connected to the intranet via an inexpensive Raspberry Pi server, can function as teaching devices for both the students attending the primary school and the adult dairy farmers. The plan is to launch a pilot project for the “digital school” in July. DARGATECH, the company that installed the lighting system at the primary school, will be mounting the server and providing user training. It is envisioned that one of the teachers at the primary school and a member of the APE (Association des Parents d’Elèves) will be trained to oversee and supervise use of the system. If all goes well, the “digital school” will become operational by the beginning of the next school year. A wide range of issues were discussed at the meeting, including the development of practical lessons focused on farming and raising animals. Beginning in October, each class will be responsible to care for and provide

hay to feed to a Goudali cow. Note: recent research in Senegal and Niger has found that Goudali cows generate considerably more milk, up to 12 liters per day, and are better acclimated to the savanna region than their Azawak counterparts (which are typically found in Burkina). For this reason, the herdsmen in Singoghin have been encouraged by SEDELAN to replace their Azawak cattle with Goudali ones.

Future plans also call for the primary school to establish a garden on school grounds, contingent upon the availability of water. Students will be taught how to cultivate and farm employing “agroecological” technology. No chemical fertilizer is to be deployed in the garden; rather, animal waste will be used to enrich the soil. This, in turn, promises to improve both the quality and quantity food produced. The vegetables harvested will be used to improve the nutritional value of noon-day meals served at the school canteen. Surplus produce will be distributed to student families. The meeting, held in the Ouagadougou cathedral, ended with the unanimous consensus to christen the Singoghin/Bittou project as “Amis Ecole Singoghin” (AES) and to announce the structure of its Board of Directors. Board members are to include a President; a Secretary; the school director; the pastoral zone technician; and Madam Diaby, manager of the min-dairy in Bittou.

Pastoralists in West Africa are not known to be particularly interested in education. For this reason, few Fulani in Burkina Faso enroll in schools or attend formal classroom instruction. So, it came as quite a surprise when a group of women, men, and tribal leaders from Signoghin (near Bittou) approached the Inspector of Primary Education to build a school for their young children. The Inspector was delighted to hear of their interest. He pledged that if the Fulani contingent was able to obtain the funds needed to build a primary school in their village, the government would provide it with teachers.

FBF members liked the concept of providing young Fulani children with an opportunity to attend school. They also liked the idea of students being in environment where both the local language (Fulfulde) and French would be spoken and literacy taught. FBF joined two other organizations: SEDELAN, a non-profit organization in Kaya and ABADAS, a NGO located in Arradon France). Together, they raised sufficient funds to build the school.

Construction is due to be completed in 2018. 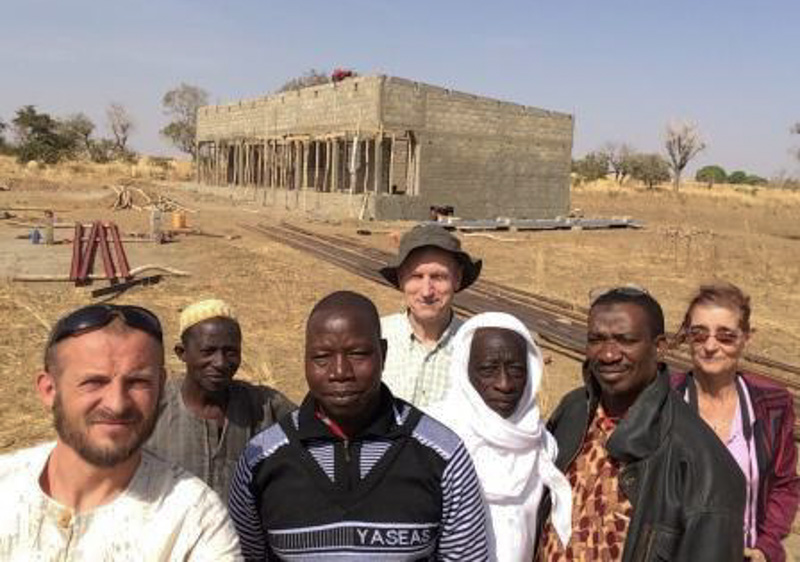 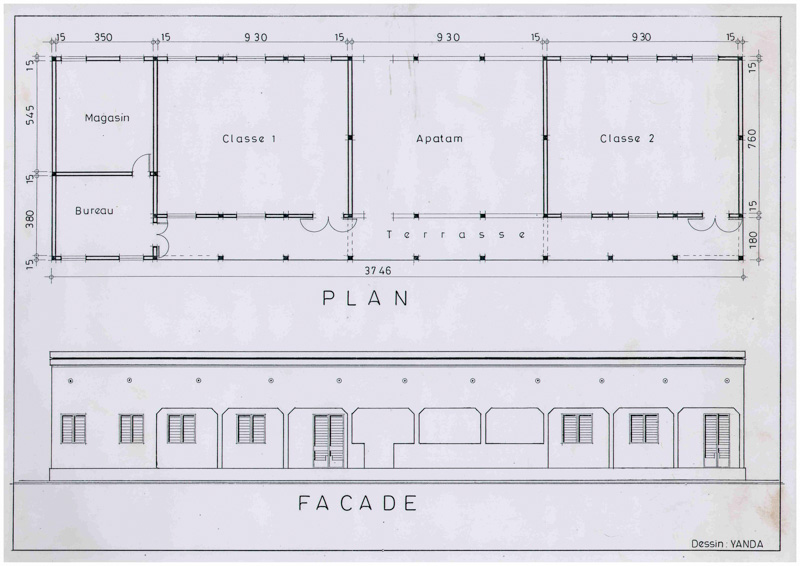 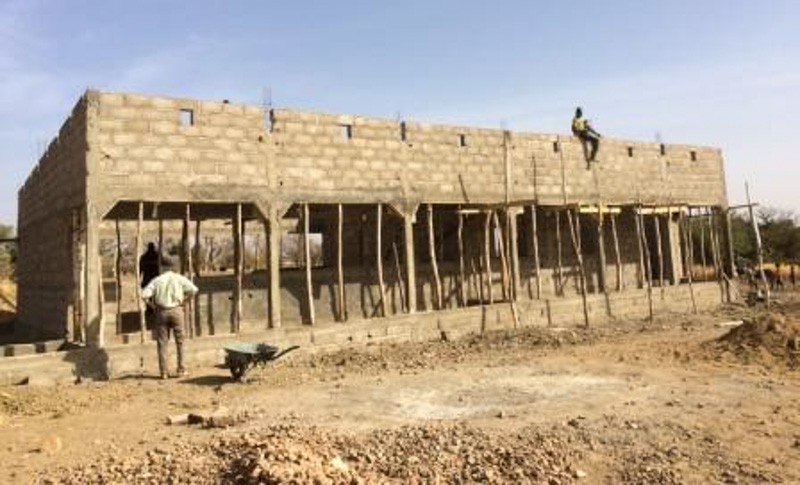 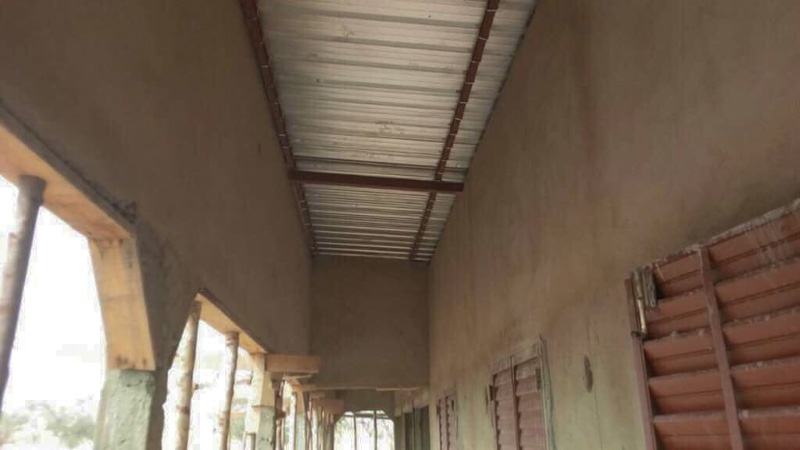 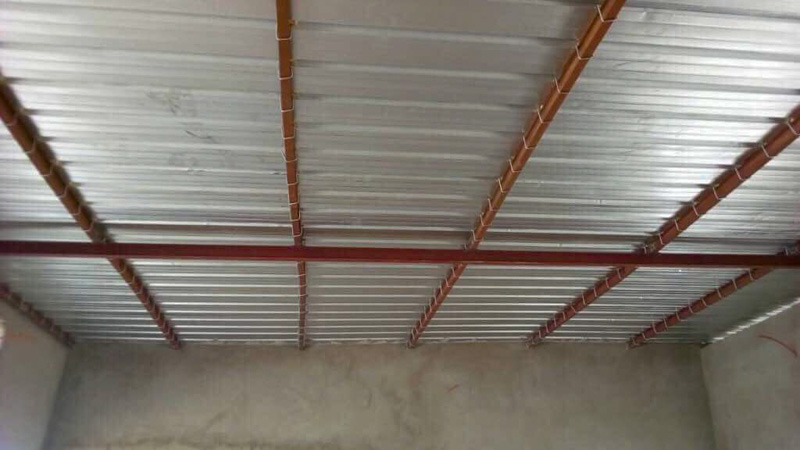 View of interior ceiling in a classroom